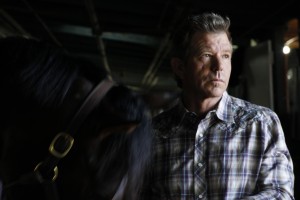 Wes Champagne of Champagne Horseshoe Company is the creator of the Blacksmith Buddy.

Just like the champions he tends to, Wes Champagne was bred to work on horses. His grandfather, Frank Shipley, was a notable USDA Vet. His father, Gerald Champagne, was a successful jockey, trainer and breeder. Wes’s brother is a farrier and their sons now follow in their footsteps.

Vladimir Cerin, a future Hall of Famer who won more than 1000 races, called Wes the best farrier in the country.

Farrier’s work is one for true cowboys, not playboys. Still to this day, Wes is usually at work by early morning and often remains at the park 12 hours later. Horse after horse, six to seven days a week during season. At night, he finds time for family and running the thriving Champagne Horseshoe Company.

The team behind the Blacksmith Buddy at their very first trade show.

Wes Champagne’s influence is felt far beyond the tracks where his horses compete. He revolutionized the equestrian industry with a simple discovery: iodine prevents commonly used adhesives like bondo and putty from sealing onto the hoof. This led to a simple invention: a glue on horseshoe that actually works.

Long before the practice of using cadaver legs as training tools was banned, Wes was thinking about how to take farrier apprenticeship to the next level. Learning the precision of the craft was one thing, practicing it while keeping a 1200-pound horse calm, is quite another. It takes tremendous upper body strength to hold the leg at the right angle, while handling tools and nails with the ease of a magician.